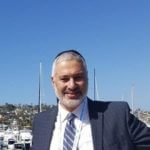 Rabbi Zev Kahn is better known in the Chicagoland area as the "Rugby Rabbi" from his days as a former Maccabi Games Gold Medalist in 1985 and 1989. Originally from Port Elizabeth, South Africa, Zev played for University of Cape Town and Western Province under 20, before being selected to represent South Africa. Zev came to Chicago after spending six years at Ohr Somayach in Jerusalem, where he completed the Ohr Lagolah teacher training program and was very involved in college student touring programs. The Kahns moved to Chicago in 1998 to work for the Chicago Community Kollel, and in 2005 Rabbi Kahn founded JET - Jewish Education Team, an outreach organization that reaches about 1,000 college students and young professionals throughout Illinois.

Debunking the Myth that a Rabbi’s Blessing Makes Food Kosher

Lessons we can learn from Pesach

Overview of the Hagaddah

Slavery and the Pesach Miracles

The Four Cups - An Intellectual look